skip to main | skip to sidebar

When Ms. Rubbo recently discovered an unconscious woman at the Diridon Transit Center she immediately contacted first responders for assistance. Dispatcher Ryan Russell took the emergency call, gathered the details of the situation and walked Rubbo through the process of administering CPR to the patient until firefighters from Station 30 arrived and took over.

Rubbo and Russell were recognized for their efforts in providing the patient the best possible chance of survival.
Posted by Craig Allyn Rose at 8:58 AM No comments:

One house was destroyed and another suffered heavy damage when a fast-moving house fire broke out in South San José. 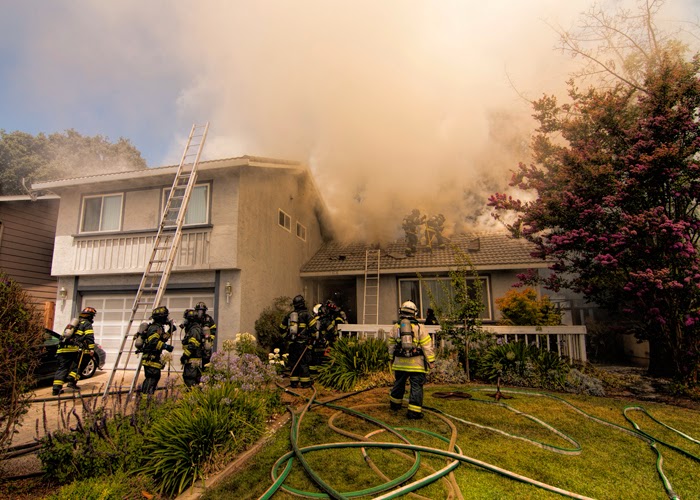 On Wednesday, July 30, 2014, at 11:22 am, the San José Fire Department responded to reports of a fire at 4328 Hampshire Place involving a two-story residence. Upon arrival firefighters were confronted with a fully involved structure with fire showing on both floors and spreading quickly to a neighboring home at 4316 Hampshire Place. 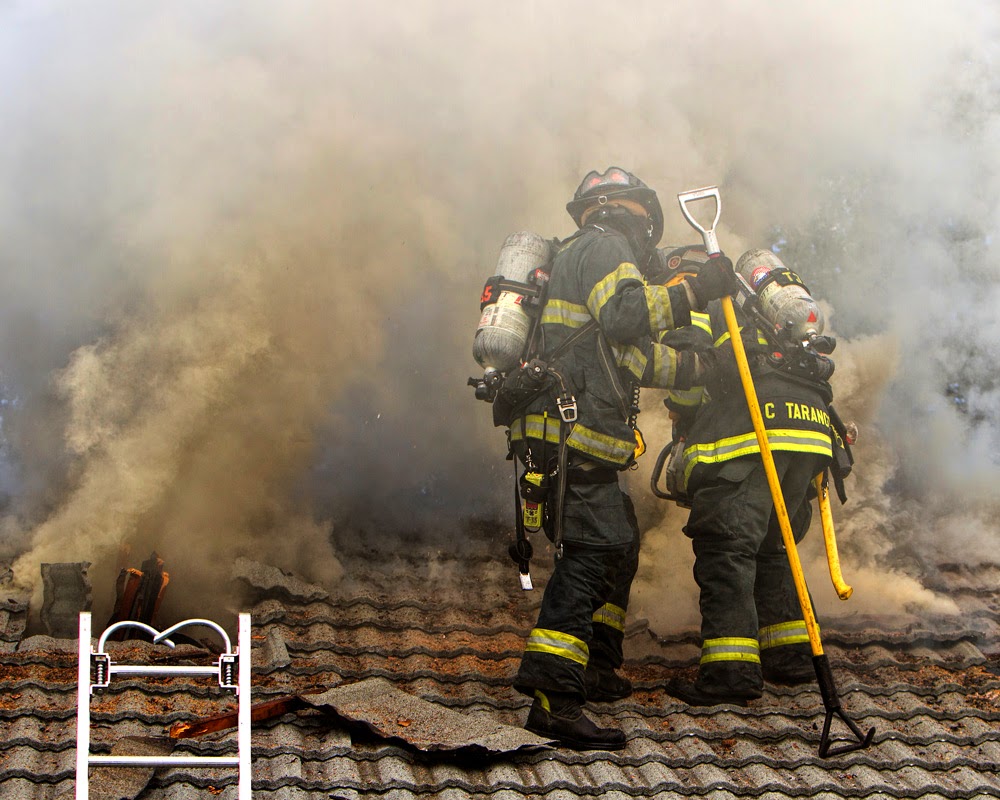 Fire was well-esablished in the first home forcing the first-in company officer to request a second-alarm. As the fire progressed the incident commander struck three additional alarms to contend with immediate needs on the fireground and to add resources to cover fire stations throughout San José. 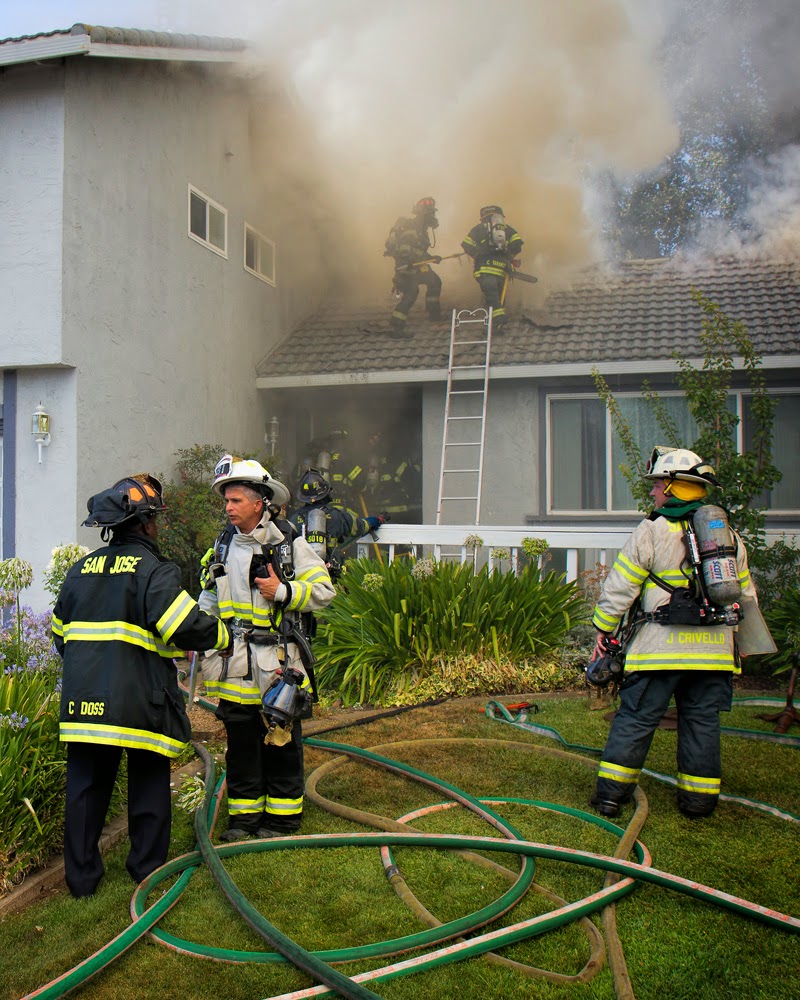 As the fire extended to the second home, firefighters mounted a second offensive attack and were able to limit the damage to only a portion of the structure. 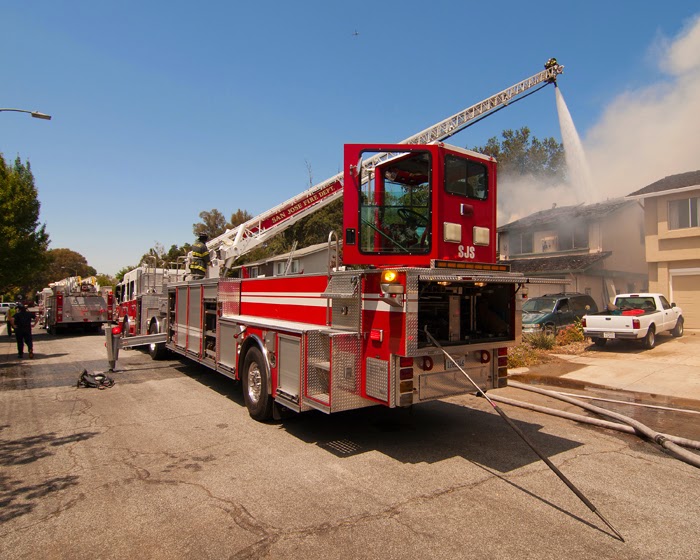 When a vehicle flew off Sierra Road, north of Alum Rock Park, flames erupted scorching over 15 acres of parched hillside in this rugged section of the Diablo Range. One element that contributed to keeping this fire, and others this season, from becoming catastrophic events is interagency cooperation. As we march deeper into California's record drought, San José Firefighters continue to protect residents of the city, and in some cases with the help of firefighters from neighboring departments. 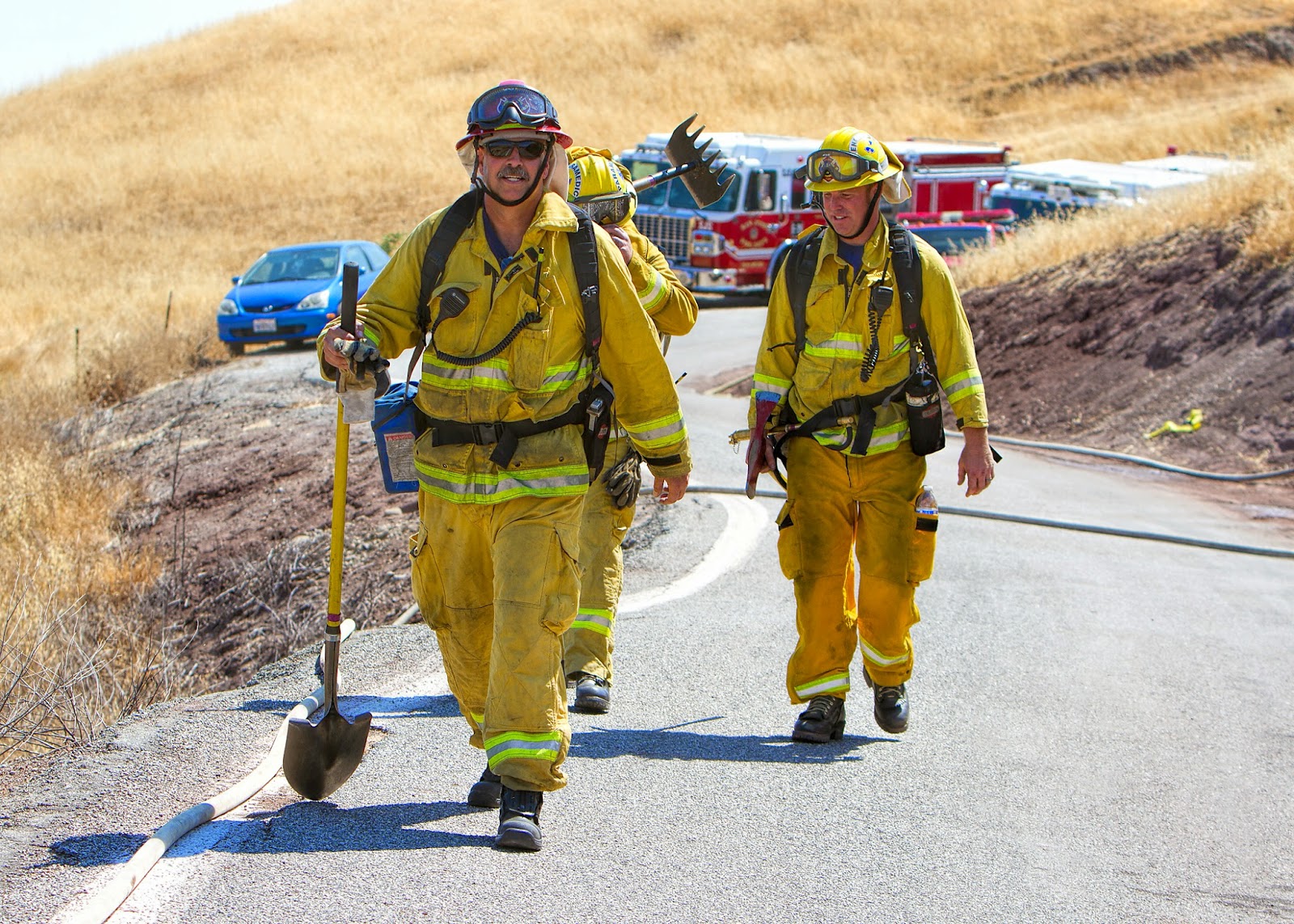 The July 29th fire that broke out in the hills east of San José saw a quick, coordinated response, from not only the San José Fire Department, but from CAL FIRE, Spring Valley Fire Department and the Milpitas Fire Department. With firefighters and equipment converging on the area the sky above the scene was occupied by aerial firefighting aircraft, including tankers and a helicopter from CAL FIRE. 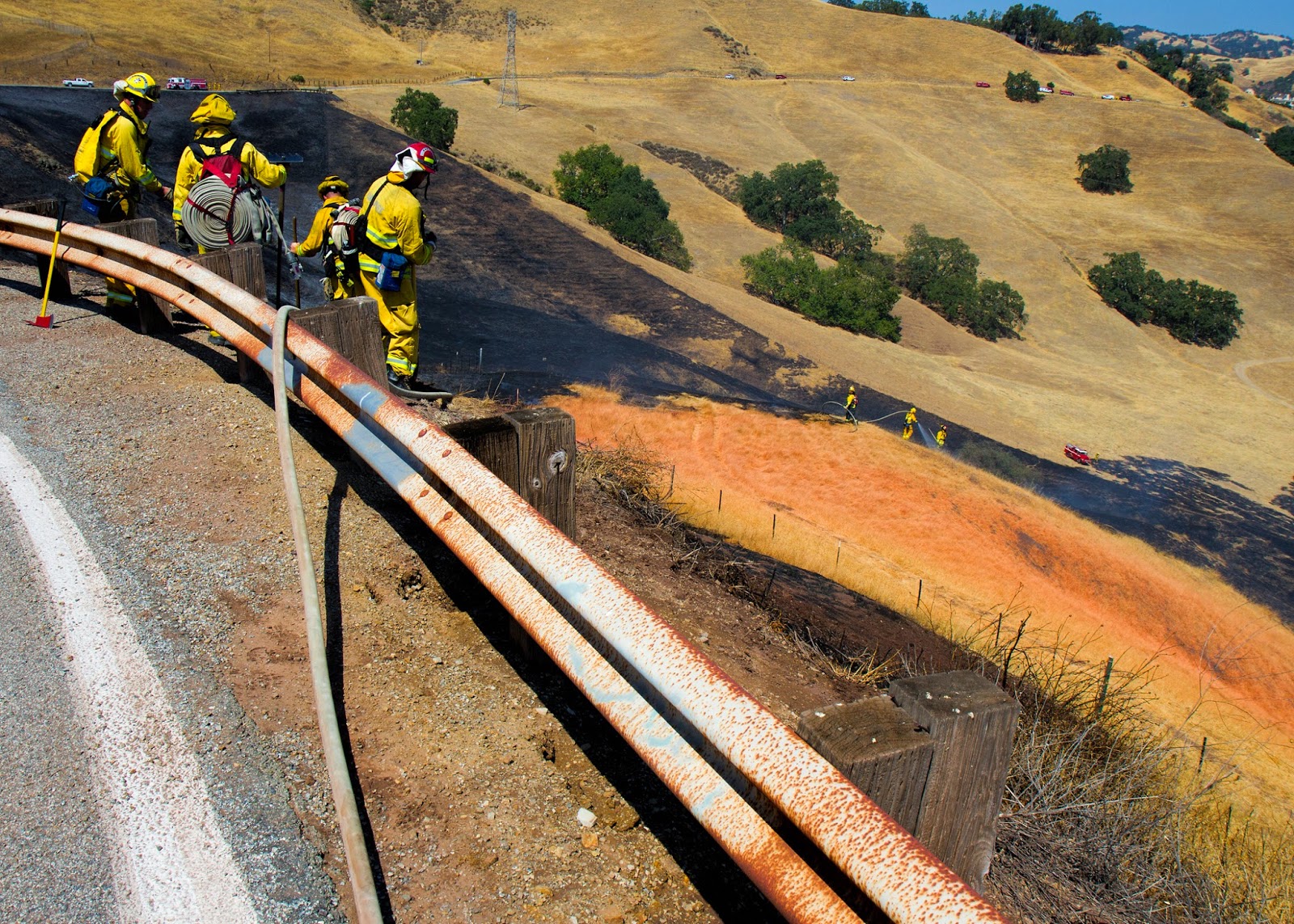 This kind of response is what is often required to keep a wildland fire from racing out of control, threatening lives and property. Thanks to long-established agreements between area departments, each agency knows it can rely on its neighboring departments when confronted with fires that have the potential to grow into major incidents. 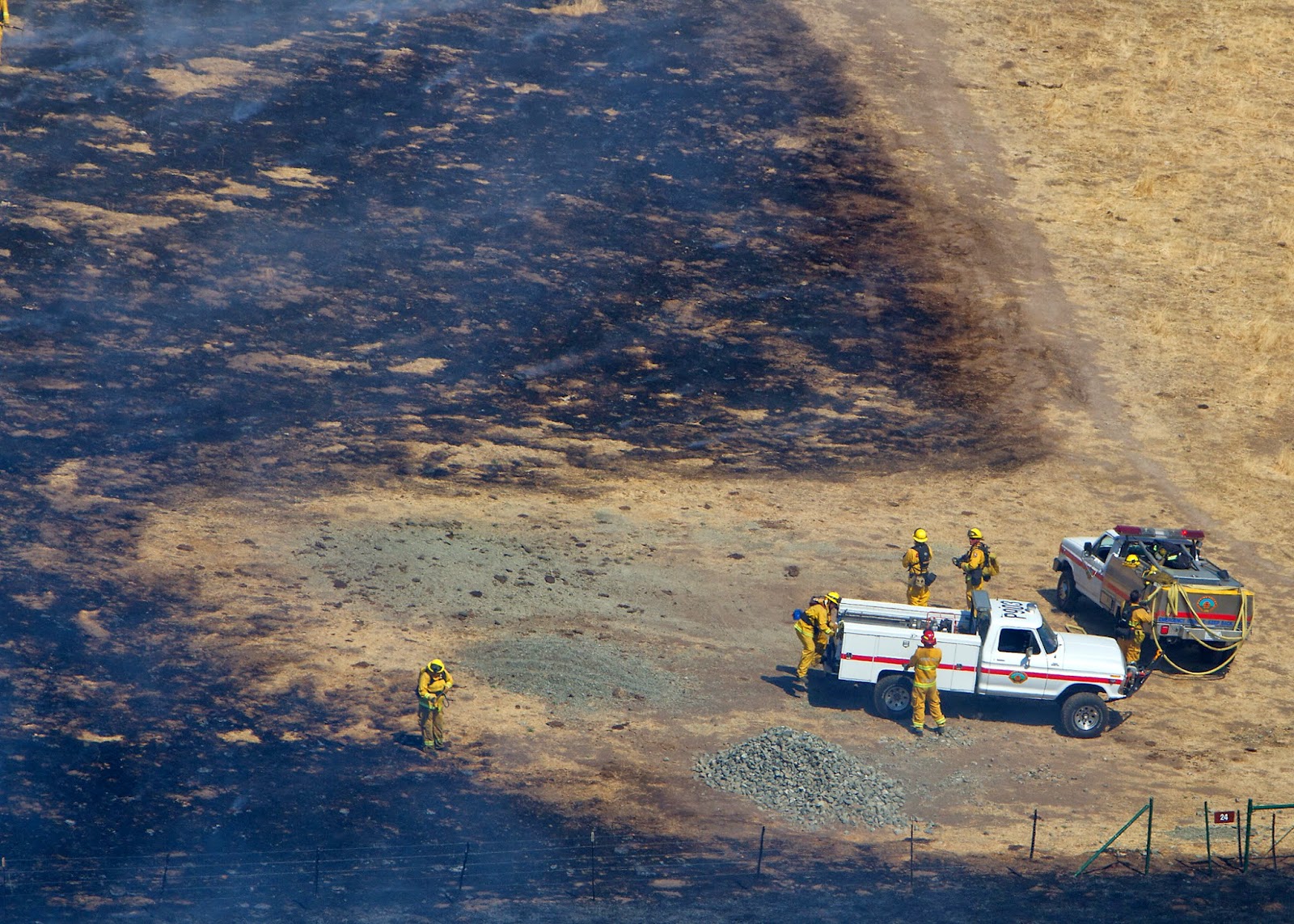 In the case of the fire along Sierra Road, over 50 San José Firefighters, working side-by-side with their peers from adjoining agencies, were able to quickly corral a blaze that could have quickly became a major conflagration. 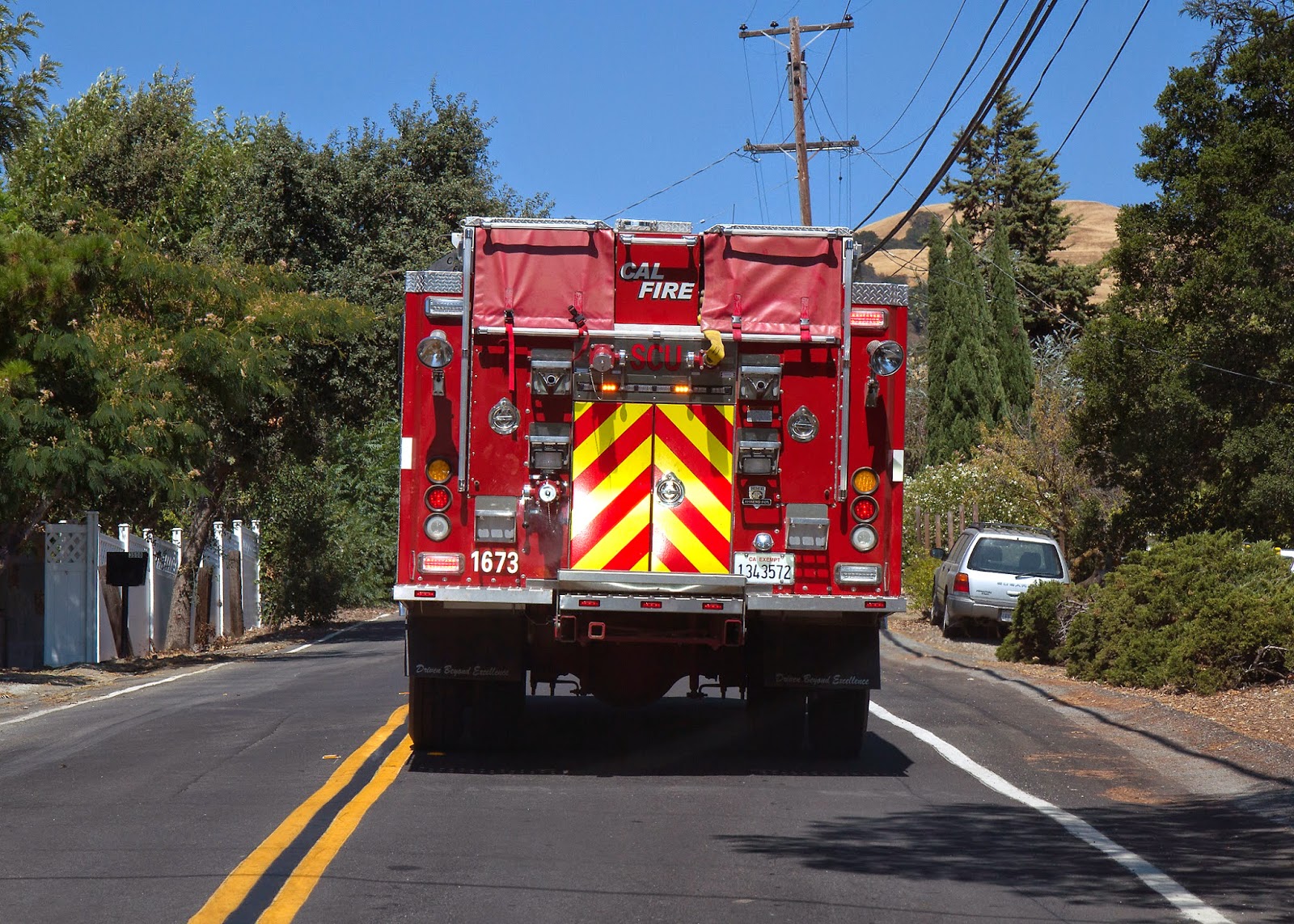 Posted by Craig Allyn Rose at 9:38 AM No comments:

On Saturday, July 24th, 2014, at 3:27 am, San José Firefighters responded to a commercial-industrial section of the city after a large column of smoke was seen rising from the area. Crews located the source of the smoke at 1596 South 7th Street, directly south of Spartan Stadium. 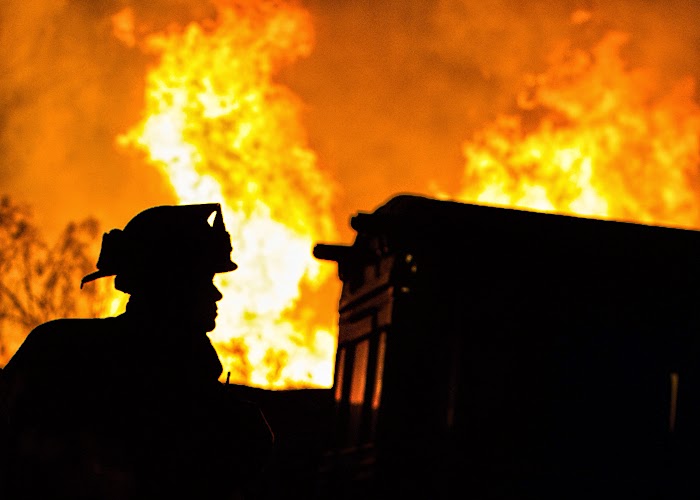 Upon arrival firefighters discovered heavy smoke and fire showing from several warehouses and outside storage areas. As crews setup for operations explosions could be heard from inside the complex and an injured subject was found with severe burns. 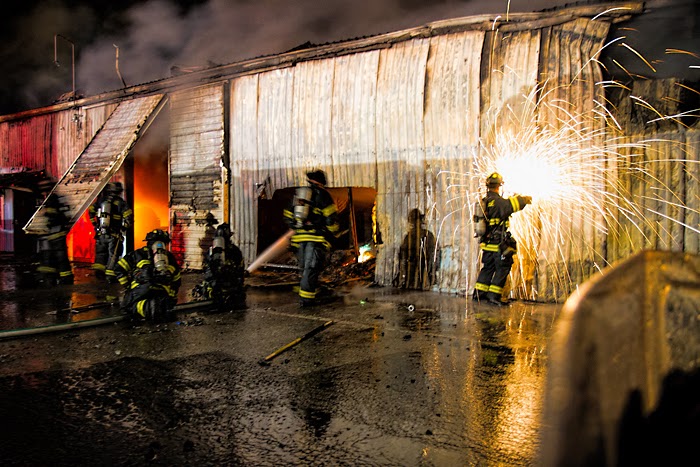 Incident Commander José Guerrero immediately called for defensive operations as five alarms were struck summoning firefighters from all over the city and from neighboring departments. Crews used numerous aerial master streams and hand lines to keep the fire from spreading to additional nearby structures. The blaze destroyed at least three warehouses, hundreds of wood pallets, numerous vehicles and industrial equipment. 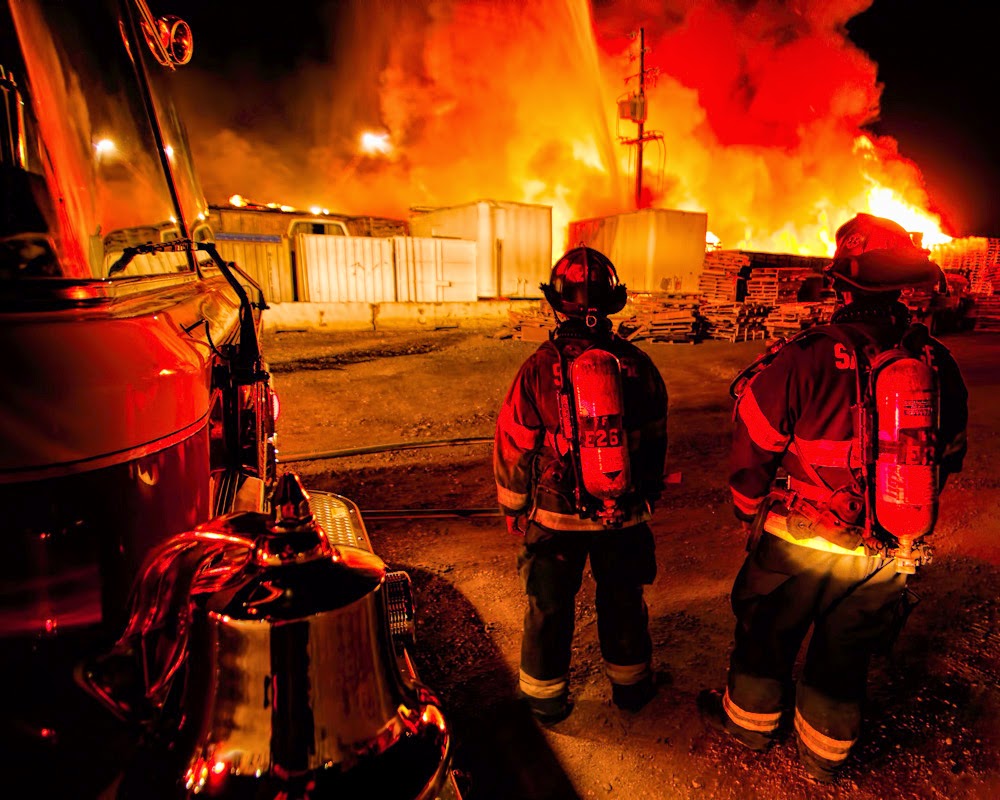 Firefighting efforts continued unabated for hours with the fire finally being declared under control at 3:56 pm. There were no additional injuries reported. 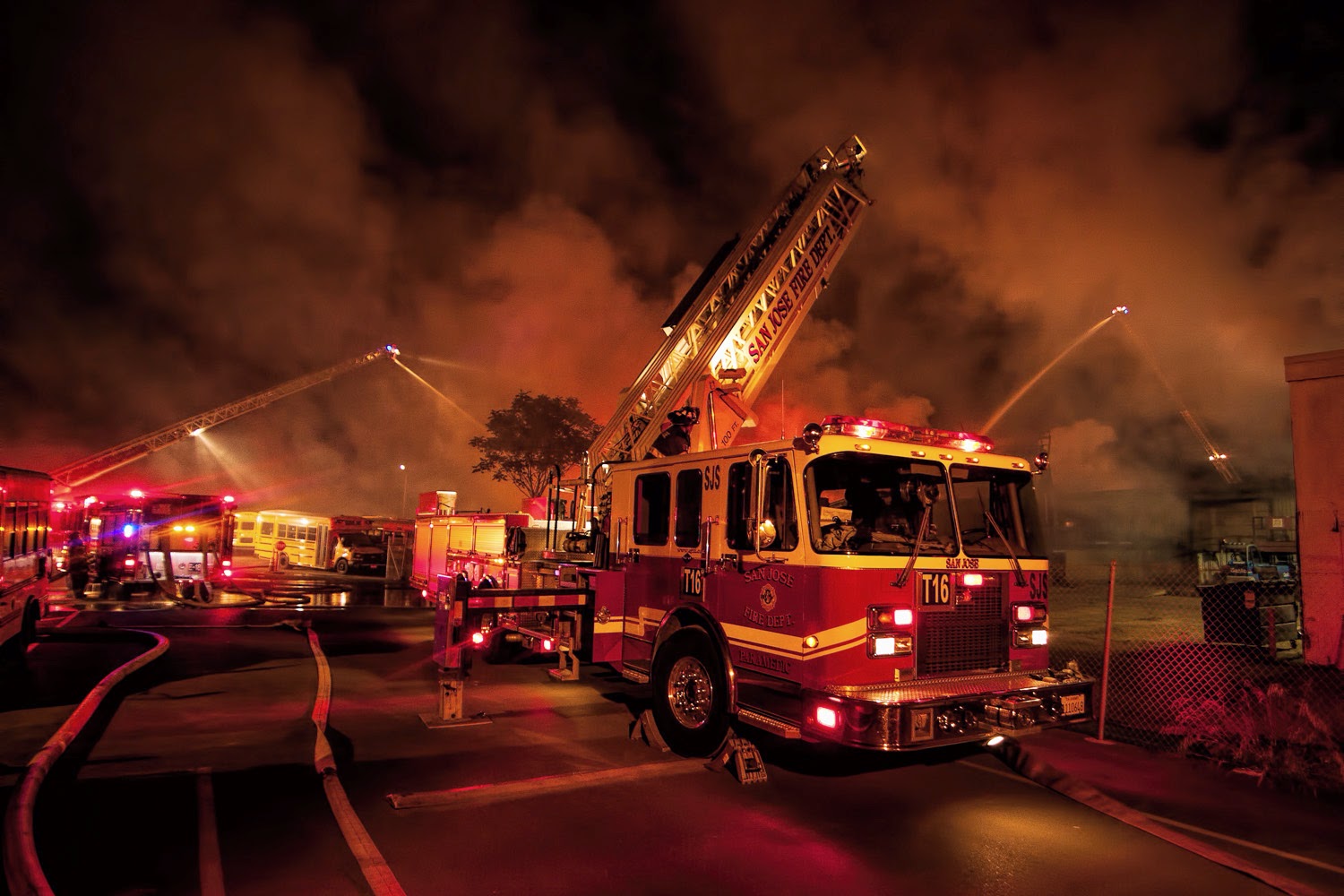 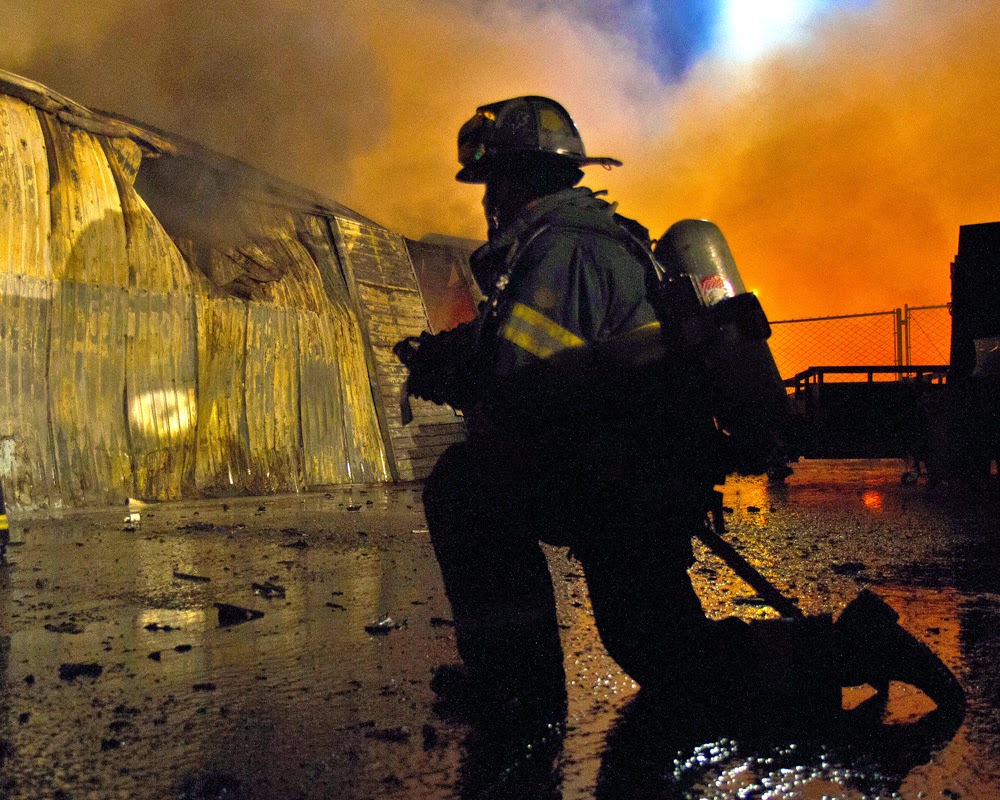 Posted by Craig Allyn Rose at 9:26 AM No comments:

On Tuesday, June 24th, 2014, Engine Company 28 responded on a medical call that would lead to the saving of a 46-year-old man in cardiac arrest. 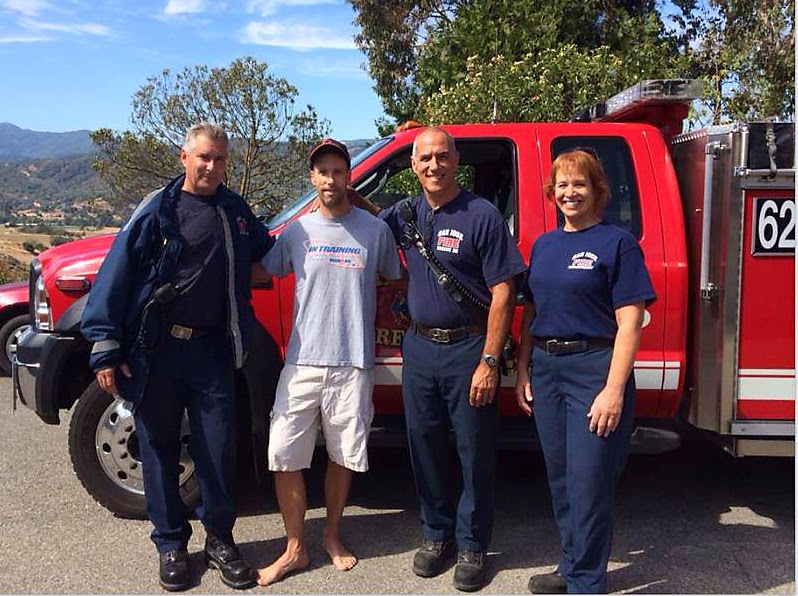 In an effort to restore heart rhythm, the crew defibrillated the patient twice as they prepared him for transport to Good Samaritan Hospital. Recently the crew of Engine Company 28 had the opportunity to meet their fully recovered patient. Job well done!

Posted by Craig Allyn Rose at 9:45 AM No comments:

On Thursday, July 17, 2014, at 1323 hours, San José firefighters responded to reports of smoke and flames showing from a small one story apartment building at 28 Brooklyn Avenue in the Burbank neighborhood. 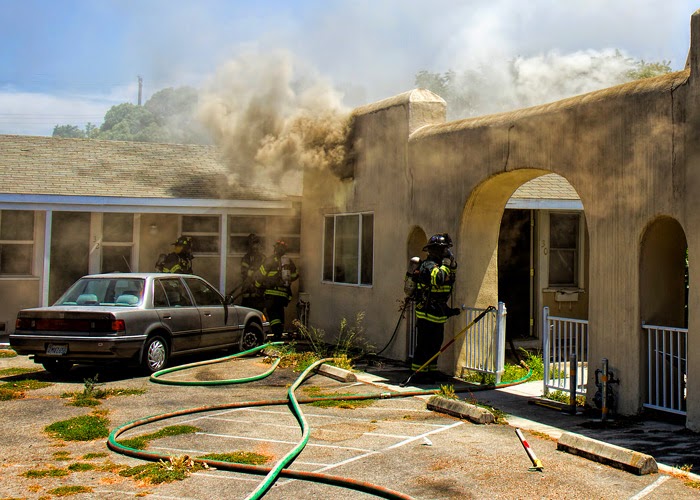 Upon arrival firefighters confirmed a working fire that had started from a barbecue left too close to an exterior wall. Flames extended into one apartment unit, into the attic and eventually to a second unit. Smoke and fire damage left three residents homeless. 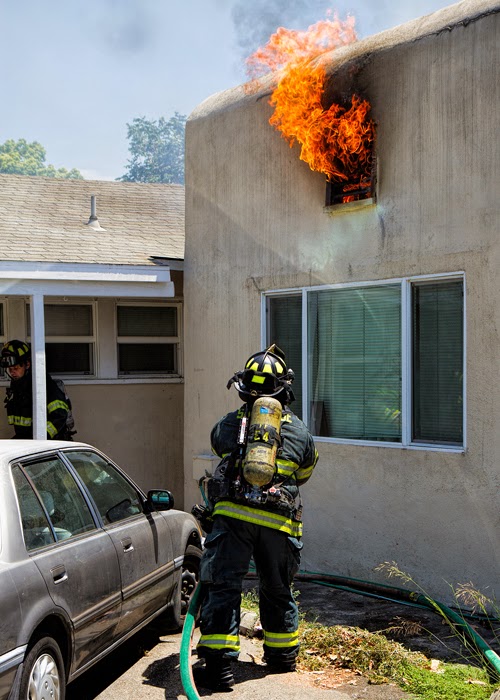 Firefighters were able to stop the progress of the fire while locating and removing two dogs with the assistance of neighbors. One firefighter suffered a minor injury and was treated on the scene. 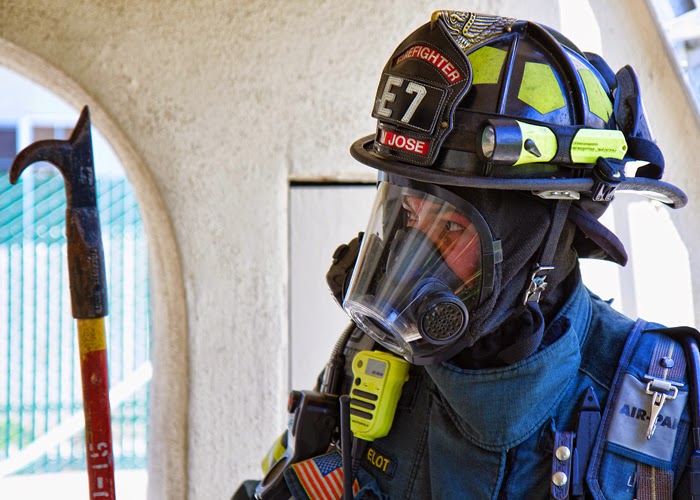 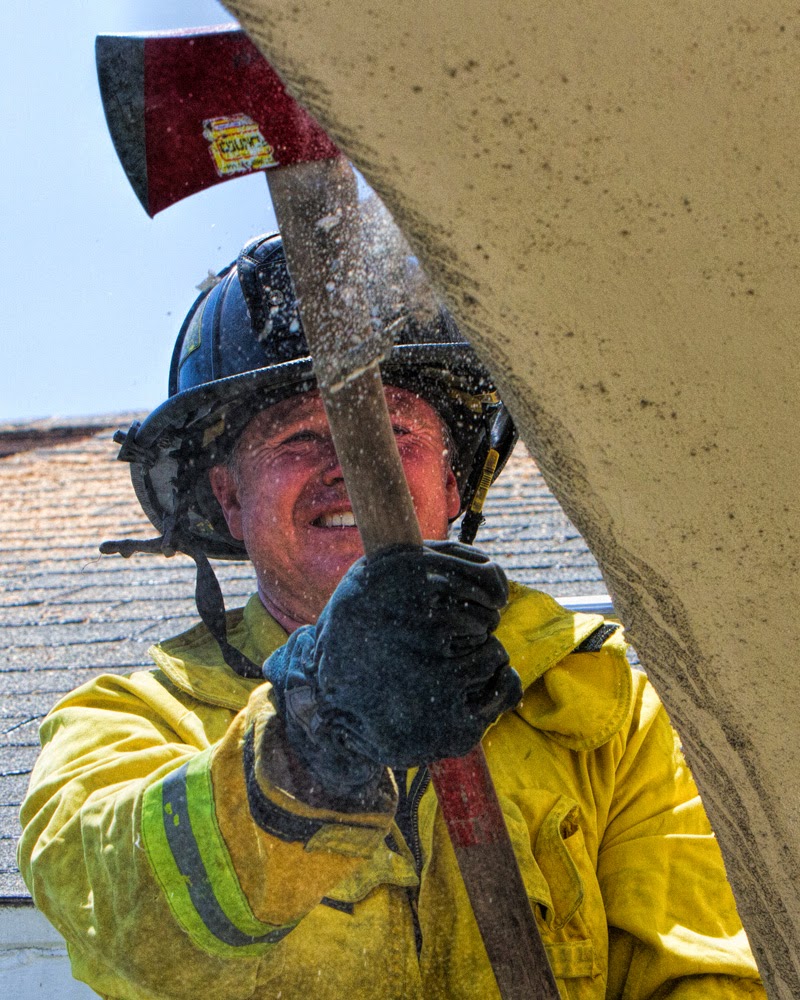 Posted by Craig Allyn Rose at 8:28 AM No comments:

On Monday, June 30, 2014, at 1340 PM, 9-1-1 calls began to flood the San José Fire Department communications center with reports of a vegetation fire in the Santa Teresa Hills above Curie Drive on the city’s south side. 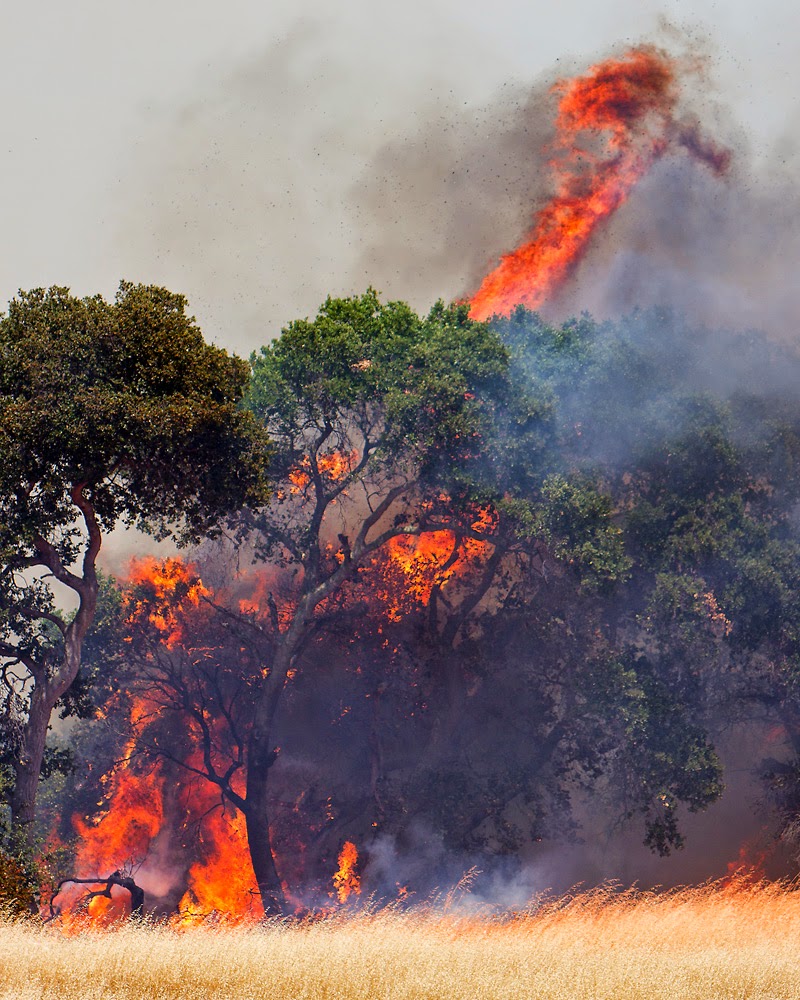 As firefighters began to arrive in the area additional resources were requested, including a full response from CAL FIRE. With fire spreading quickly in the tinder dry vegetation a call went out for more firefighters eventually making this blaze a four-alarm incident. Initial estimates place the size of the fire at 175 acres with containment achieved by 1917 hours. 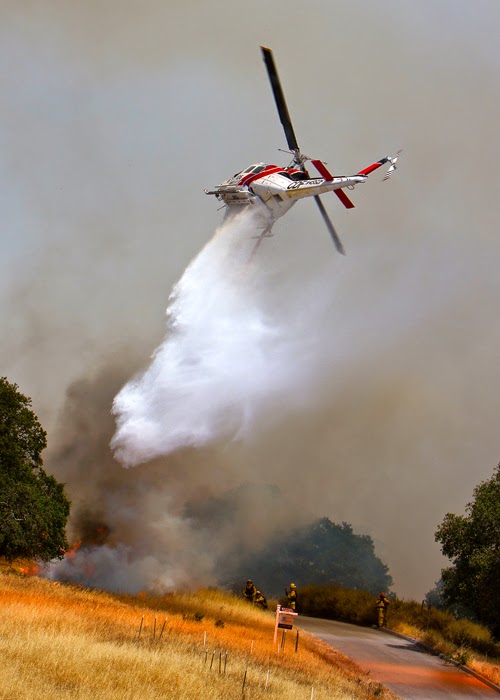 Despite blistering early summer heat, firefighters were able to corral the fire saving numerous homes. Two firefighters suffered heat related injuries and were transported to an area hospital for treatment. 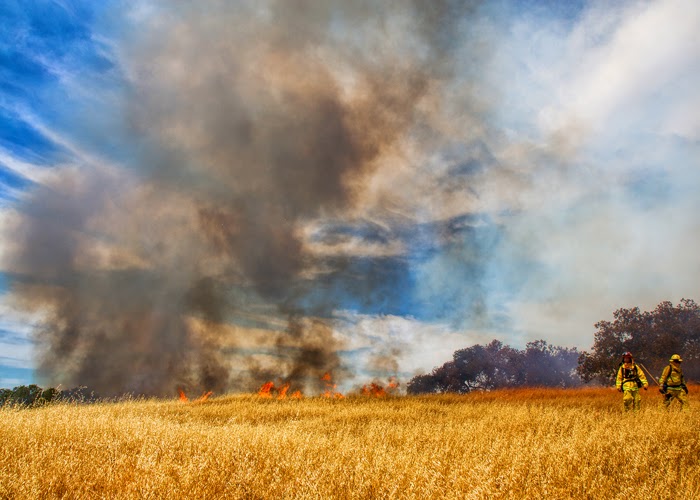 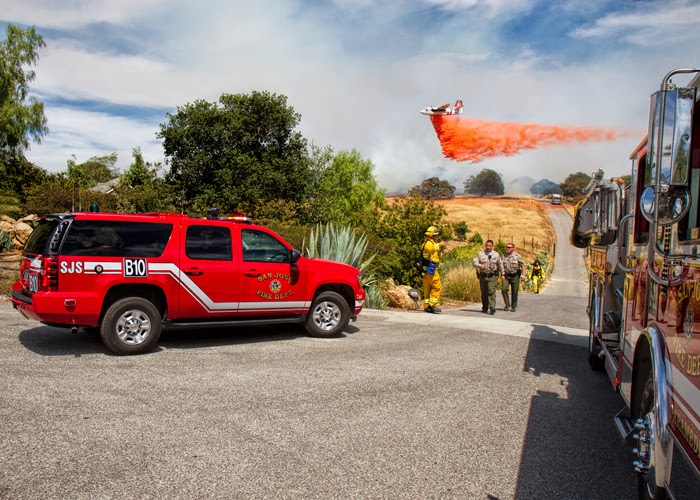 Posted by Craig Allyn Rose at 6:44 AM No comments:

On Friday, June 27, 2014, at 1404 hours, units of the San José Fire Department responded to reports of a structure fire with possible rescue at 778 Warring Drive in South San José. 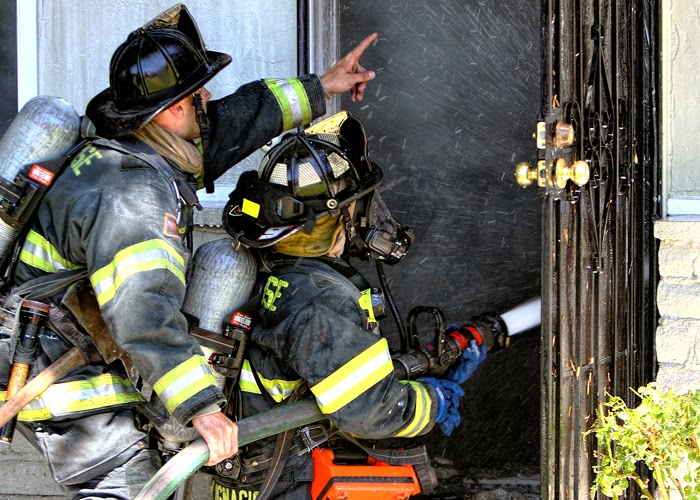 While en route, firefighters reported a column of smoke showing and upon arrival confirmed heavy smoke and fire showing from at least one of the four units. Companies immediately went into rescue mode and quickly confirmed that all occupants were out of the building. 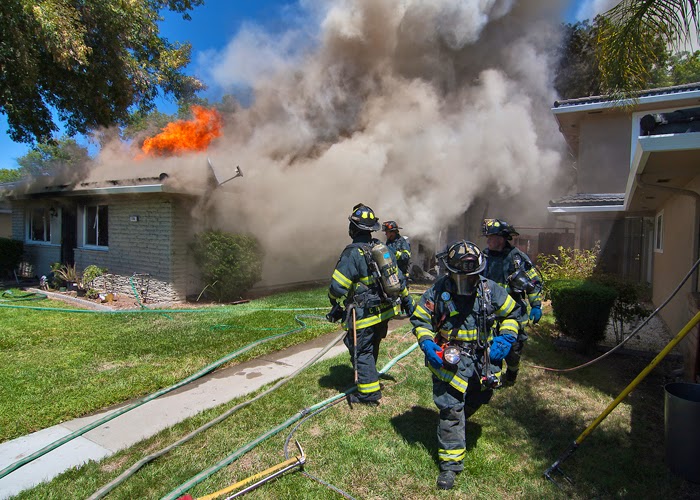 Initial efforts to press an offensive attack on the fire were quickly thwarted when a large section of roof began to severely sag. Firefighters vacated the structure and assumed defensive operations to prevent the blaze from extending to neighboring structures. 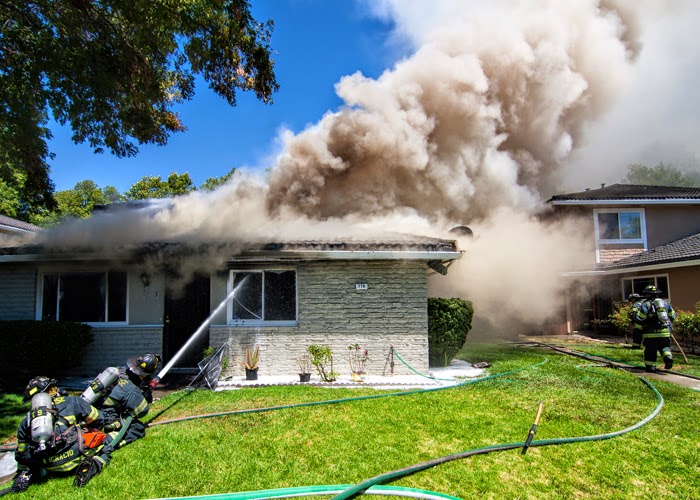 The fire quickly grew to three-alarms with the Santa Clara County Fire Department sending several units to assist in the firefighting efforts. One firefighter received minor burns and several residents are now homeless and being assisted by the American Red Cross of Silicon Valley. 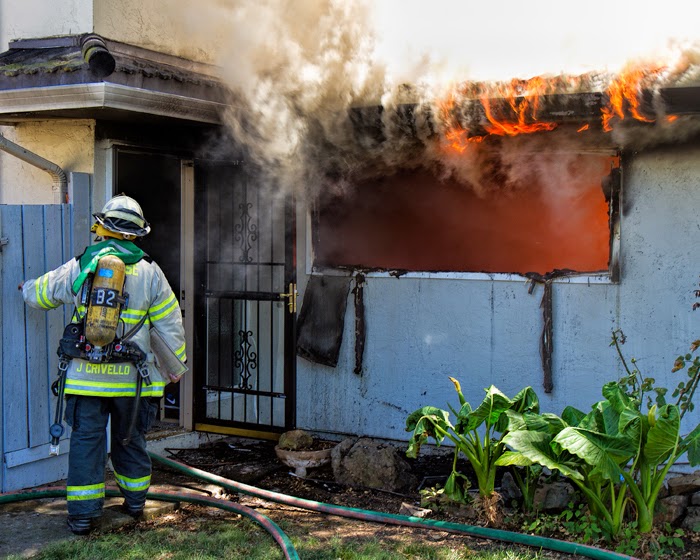 Posted by Craig Allyn Rose at 6:47 AM No comments: